Before and after you read Halakhah, by Chaim Saiman: what should you know? What will you learn?

I have written in glowing terms about the book  Halakhah: The Rabbinic Idea of Law, by Chaim Saiman. It's a novel explanation of an important topic, and the author writes well. But it is still not easy going.

If you plan to read it (and I hope you do!), think about acquainting yourself with these terms first:

The Judaism 101 and My Jewish Learning websites would be good places to start.

And here's your reward: in addition to being able to follow Saiman's ingenious arguments and examples, you'll learn about topics like the following!
Honestly, you could spend years of study just following up the introductions that Saiman gives you in this book. But if you only read this book, you'll get a road map that you never had before.
Posted by Dennis Fischman at 5:46 PM No comments:

Halakhah: The Rabbinic Idea of Law, by Chaim Saiman 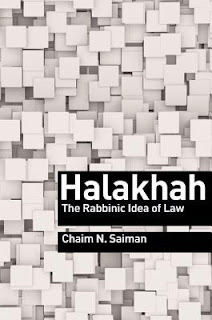 You grew up in an environment where Christian culture was the norm. Even if you weren't religious yourself, from an early age, you heard people contrast Jewish legalism with Christian spiritual freedom. You heard that the letter of the Law killeth and the Spirit brings life.

Even today, you dimly recall Bible stories where it sounds like Jesus is throwing off the chains that the "old covenant" put on the Jews. In the back of your mind, you wonder why the Jews stubbornly clung to their dried-up set of rules.

Then you read Halakhah: The Rabbinic Idea of Law, by Chaim Saiman, and it blew your mind.

You grew up in a Jewish household. Your family celebrated the holidays and occasionally showed up at shul (especially if you someone you knew was becoming bar or bat mitzvah that day).

But you never really considered keeping kosher, not driving or shopping on Shabbat, or praying multiple times a day. That all seemed liked Old World, black-hat sort of stuff. You vaguely knew there were rules about it in the Talmud. That seemed like reason enough to avoid the Talmud, and "Jewish law" in general.

Then you read Halakhah: The Rabbinic Idea of Law, by Chaim Saiman, and it blew your mind.

In this book, Saiman makes a convincing case that "Jewish law" is nothing like what people think it is. It's altogether strange, like a parallel universe. It mixes together stuff that clearly looks like "do this and don't do that" with storytelling, exegesis, parable, philosophy, and mysticism, as if there were no boundaries between them.

Even the legal parts of the texts are eerie. They pay as much attention to situations that rarely occur, don't occur any more, or never did and never could occur (by the rabbis' own reckoning) as they pay to everyday issues of what to eat and drink and how to do business. They look at Bible stories and poetry as possible sources for legal reasoning (and vice versa!)

Perhaps most strange of all: We are accustomed to thinking of "law" as something a government enforces. Halakhah was created--yes, beginning at the time when Jesus was still there to hear about it--in a situation where Jews did not govern themselves.

So, when you get detailed rules about how to light the Shabbat candles at home, that's one thing. But when you get equally detailed and elaborated procedures for judging murder cases when no Jewish courts had jurisdiction over them...or instructions for how the priests should offer sacrifices in the Temple in Jerusalem, debated after the Temple had been destroyed and Jews weren't even allowed by the Romans to enter Jerusalem...then this is not "the Law" as we know it.

Torah doesn't mean law. It means teaching: by God to us, about the right way to live.

That teaching can take all the different forms I mentioned above: storytelling, exegesis, parable, philosophy, and mysticism. Saiman makes a convincing case that in rabbinic Judaism, the primary way we learn how God wants us to live is through discussion of halakhah. He gives examples of how legal discussion is the entryway to profound questions like:
These sound like the questions a philosopher would ask. They are not questions that would be posed directly in rabbinic writings, however, and for good reason. Saiman points out:

...the Talmud bears greater resemblance to literature than analytic philosophy...The Talmud simply does not make any sense outside of its "plot"--the foundational claims of the world it inhabits. These include that God gave the Torah to the Jewish people and commanded them to perform mitzvot. (p.139)

The Talmud assumes that the story is always already going on, and that you are a character in it. You don't need abstractions. You need to know how to play your part.

So, here's the story you need to understand why anyone would study halakhah.

You are part of a people addressed by God and entrusted with the task of making this world the way it ought to be. There isn't a moment of your life that's simply just there. It's all there for you to lift it up and make it holy.

You don't have to do it alone. You always pursue holiness in community.

You don't have to figure it out all by yourself. You are part of a tradition that's thousands of years old and still going strong.

You don't have to reason it out from first principles. You can turn to the first page, instead.


From what time is the evening Shema recited? "From the time that the kohanim [priests] enter to eat their consecrated food [terumah], until the end of the first watch." These are the words of Rabbi Eliezer. But the sages say: until midnight. Rabban Gamliel says: until the dawn rises.

If you decide to ask, "What is the Shema? Why is it said? Why is it said at set times? Why the evening? Who were the priests, what was their consecrated food, and when did they eat it? What were the watches of the night, and what was the first watch? Who was Rabbi Eliezer, and what do we know about his methodology? Who were "the sages"? Who was Rabban Gamliel? What were their methodologies, and how did they arrive at differing conclusions? What did later generations do to decide among them? What practical implications did this question have, the one about when you have missed your opportunity to say the evening Shema? What ethical implications does it have? What does it tell us about our relationship to God?"...then you are part of that age-old partnership with God.

And if you are not, at least you can now stop thinking of it as just a set of rules!


Posted by Dennis Fischman at 5:20 PM No comments:

Rabbi Abel and his junior-youth group attend a service at St. James Episcopal Church, where the pompous Dr. Larrabie expounds the theory of Swelling Revelation. Then, at the end of the service, the Rabbi is invited to say a few words.

I can't tell you how happy my class and I are to join you today...It was especially interesting to hear about the theory of Swelling Revelation. Because different sets of quotes might suggest another swell theory. For example...in the Old Testament: "Thou art a God ready to pardon, gracious and full of compassion, slow to anger, and plenteous in mercy." But in the New Testament: "He that shall blaspheme against the Holy Ghost hath never forgiveness, but is in danger of eternal damnation."

In the Old Testament: "The Lord of Hosts is exalted through justice...Do justice to the afflicted and destitute, rescue the poor and needy." But in the New Testament: "Believe on the Lord Jesus Christ, and thou shalt be saved."

In the Old Testament: "Let the oppressed go free...break every yoke..deal thy bread to the hungry...bring the poor that are cast out to thy house...cover the naked...hide not thyself from thine own flesh." But in the New Testament: "Depart from me, ye cursed, into everlasting fire."

Just to be abundantly clear, neither the fictional rabbi, the author (also a rabbi), nor I are saying that Judaism is all sweetness and light and Christianity is all hellfire. We just resent it when Christians oversimplify both their religion and Judaism at our expense.

"Why do you see the speck that is in your brother’s eye, but do not notice the log that is in your own eye?" https://biblehub.com/matthew/7-3.htm
Posted by Dennis Fischman at 6:44 PM No comments:

This is an Uprising 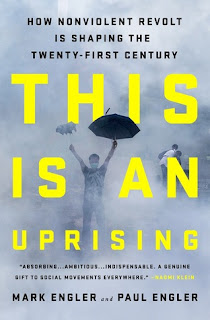 Are you part of the Resistance? Did you become "political" only after an election result you couldn't imagine ahead of time and still can't accept? Or, like me, have you been pressing for social change in the U.S. for decades, whether it was popular or not?

Either way, you must read this book. Mark and Paul Engler help all of us understand what we're doing, how we fit a pattern that has happened before in history, and how to learn from traditions of revolt to create a winning strategy.

Particularly important right now: read this book to make sense of the rush of activity in the first half of 2017 and what will come next, to be prepared for highs and lows and periods when it feels like nothing's happening and we might have wasted our time--but if we use the quiet times wisely, we come back stronger.

The authors tell us that there are at least two important models for creating social change. The one that has received most study is the long-term systematic community organizing, power building approach associated with Saul Alinsky. That model has proven itself, but all by itself, it doesn't give us enough insight to understand what's happened since the November 2016 election in the U.S. (or during the Civil Rights Movement, or the Arab Spring, or the movement that overthrew Milosevic in Serbia, or Earth First!, Occupy Wall Street, or the movement that won marriage equality in the U.S.).

The other, more decentralized approach is what they call "momentum-based organizing" or "protest movements" or simply, "uprising." Frances Fox Piven is the writer most associated with this approach. It calls for creating "moments of the whirlwind" when the whole debate changes and what seemed impossible suddenly becomes a widely-supported demand.

It's impossible to create a formula for uprising, and the authors wisely don't try. What they do give us is a set of lessons about what worked.


Not all efforts to create change prevail over the long term. But those that do tend to see themselves as part of an ecology that is made healthier when different traditions each contribute: mass mobilizations alter the terms of political debate and create new possibilities for progress; structure-based organizing helps take advantage of this potential and protects against efforts to roll back advances;  and countercultural communities preserve progressive values, nurturing dissidents who go on to initiate the next waves of revolt.


Posted by Dennis Fischman at 4:29 PM No comments:

What do we do now that Trump has been elected?

On election night, a friend asked on Facebook, “So what do we do if Trump wins?” It seems that many people had not thought about it before that moment.

I had. I’m not saying my first thoughts are great, and they should not be definitive. Here’s my list, if you’re looking for somewhere to start. Please add to it.


Posted by Dennis Fischman at 12:15 PM No comments: